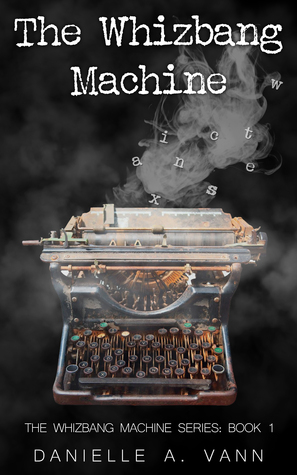 The Whizbang Machine by Danielle A. Vann

Let me start out by saying that after reading the description, I was completely ready to jump right in. A magical typewriter that writes back to you with secrets that have to do with a family curse. Sign me up!

Except that I couldn’t get past the first four chapters to find out more. This book deserved another draft. It’s a brilliant concept that just isn’t hitting the mark. Elizabeth is going on sixteen years old and she acts like she’s a child. The characterization is off there, she just doesn’t pull me in and make me fantasize about being that age again with the adventures I could have had.

This really needed a tighter edit and a better proofread before being published. Some of the word choices don’t seem appropriate for the action or dialogue they’re being used with. For example, when Jack, the grandpa, finally comes home to visit after not seeing the family for eight years, he wants to talk about what her and her mom have been up to first.
“‘Same old, same old. School, soccer practice, school, repeat,’ I replied, brushing my hand against my forehead and swooning over the table.”
Why is she swooning? And why would she think he would know what the “same old, same old” is when he’s been absent for eight years? I think that line in particular is what pulled me out of the story. He may have been sending postcards for all those years, but that’s not the same as actually being there or holding conversations over the phone-something they apparently hadn’t done over the years.

The third chapter about the boxes Jack brought home as gifts really needed to be edited. In one spot, the mom was clenching her teeth, but the word used was “clinching.” Aside from an error like that and with missing commas, the real issue lies with the content. Elizabeth was supposed to open a certain box, but then she wanted Jack to open it, but then he told her to open it. Then she felt weird about opening it. It just kept going with her not opening the box. I understand that this was to create suspense surrounding what was in the box, but all it did was make me want to slap Elizabeth for taking her sweet time. It’s like being at a birthday party where you want to see the birthday girl open a particular gift, and then she decides to unwrap it in slow motion. You’re not being suspenseful, you’re being annoying.

There’s also the issue of the dialogue feeling forced along with telling readers what’s happening as opposed to showing. I think this is really where Danielle could have improved. In the beginning, Elizabeth is talking with her mom about Jack coming to visit. Her mom asks her to grab the crackers, and then Elizabeth responds with “Here’s the crackers.” There was never any action involved. It would have been better to show us grabbing the crackers and just handing them to her mom instead of telling us about it. Also, there is nothing wrong with using “said” for the dialogue tag, but other words are used in its place which aren’t realistic. In regard to the surprise her mom and Jack had for Elizabeth and telling her about it, this was the mom’s response: “‘If you must,’ Mom whined.” Why would she be whining? She’s just as excited about the trip that she worked so hard to conceal.

In closing, I was totally hooked on the idea of the story, but the execution needed help. I really think another draft and a better editor would have made this story wonderful.

Member of the National Society of Leadership and Success