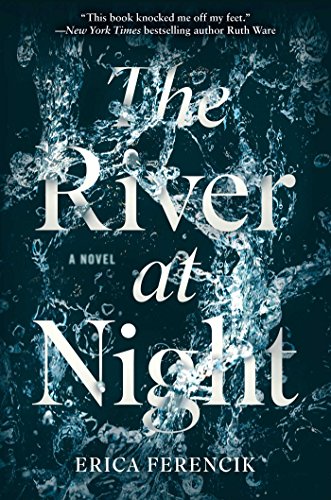 The River at Night by Erica Ferencik

Winifred is lonely. Her husband has left her for a grad student, and her beloved brother has taken his own life. But every year, her and her three best friends go on a vacation adventure to get away from all of the worries of the world and to catch up with each other. The latest trip idea though is worrisome. White water rafting on a river that has only ever been navigated by a 20 year old who is also going to be their guide? No way. But Wini doesn’t want to be left behind, the one who chickens out while the others end up having a blast and she’s left alone. The adventure ends up taking a turn for the worst, and not only are their friendships tested, but Wini has to dig deep and see what she’s made of to survive.

This is a suspenseful thriller that kept me captivated by the truthfulness and realness of their friendships with each other. I could picture my friends in each of those roles and would know that we would have acted very similarly to these characters. It felt like I was almost testing myself, that I was in Wini’s shoes and would have made similar choices.

There’s a similarity between Wini and her brother and a later character, Dean, that I really enjoyed. I think those scenes in particular are what really makes Wini have her own voice and it’s awesome.

Ultimately, in this was a suspenseful thriller, I felt like we were really watching Wini accept herself and to not be so afraid of the world, to be welcoming of whatever comes next because nothing can be as fearful as the river at night.

Many thanks to NetGalley for an advanced reader copy of this book!

Member of the National Society of Leadership and Success